We came early Saturday morning to install the signs. No traffic on the roads - even in central London. There were no people on site (Spitafields Market - E1) either - which is always good for us as it is much safer for everybody. So we started. We took two long ladders from our van and put them against the old sign. We had to undo the top frame in order to take the old sign down. It was fairly easy as the sign was quite new. We took the new sign form the roof of our van - it consists of two 5mm thick acrylic boards with digitally printed graphics and then laminated in order to maintain colors for life. We easily installed the left part of the sign from the ladders and then another one, putting the top frame back on and securing it with the same screws which we have taken out earlier. The joint between the boards is always a problem. We had to use self adhesive strip to cover the gap between the boards and also make them stable in order not to move in the future. The whole job took us app 3 hours on site. You can see the results below: 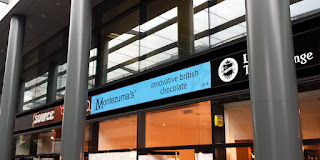 http://www.2signs.co.uk/sign-making-london
Posted by Unknown at 03:18 No comments: